Made three connections today, two short and the other took an entire day of our time.

As I stood at the top and shouted down directions to the kids, who were on the ground searching for more planes, I noticed a couple looking at me a little oddly. I turned and pointed to several planes stuck high in one of the large, nearby trees. It took a few seconds, but then they saw the planes and realized what we were doing. Much laughter.

The couple was from Holland, visiting the United States. They were very enthusiastic about our country. We chatted for a few minutes about their trip, the weather, the good and the bad about the world. It was only a few short minutes, but I tried my best to be a good ambassador for our country, for some very interesting people.

Connection Two took place at a small gas station in the middle of nowhere. We were coming home from our trip and needed gas. Pulling into a small gas station, I got out to stretch my legs while the attendant pumped the gas. Remembering what I wrote the other day about lousy jobs, I asked him if he thought summer was finally here. He chuckled and told me we were already heading into fall.

He was from Tennessee. I told him that my son and I had visited Knoxville. Ironically, Knoxville was his home town. He appreciated me saying that the area was quite pretty, but sheepishly added that not all parts of his city were pretty. Turning to fill up another car, he said that he really does not like all this rain and wonders why he is living here.

I hope he finds a better station in life soon.

Connection Three was an all day affair. A friend of my son has been going through a tough family time so we asked him if he wanted to spend the day with us at the beach.

His eyes lit up as if no one had ever asked him that before. He thanked me profusely, calling his dad right away for permission. I smiled as he bounced around our house. 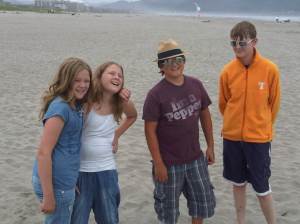 The trip was a success. All six of us tried beach bikes in the sand. Quite fun, quite tiring, and quite a few wet bottoms.

Following that, we explored Astoria, an old coastal town that my family knows well.

Seeing the familiar through new eyes helps you see it in a new way. And the eyes of my son’s friend helped steer us toward the local trolley which we had never taken. That opened our eyes to a new side of the city, a new restaurant, and history that was new to us.

We gave a day to our friend’s son. In exchange he gave us a new way to experience a place we thought we knew.

What is one way to make those connections? You guessed it, giving your time.

Our perception of time is key to how we use our time. The most fundamental way to change that perception is to give our time. This opens us up to new opportunities and ideas from which we can build to really make a difference. ... Yes, we *do* have time to make a difference!
View all posts by Eric Winger →
This entry was posted in Around the House and tagged Children, Connections. Bookmark the permalink.
Loading Comments...
Comment
×
%d bloggers like this: