Post-Christmas Resolution, Day 327 – It Was A Dark And Stormy Night

“The pen is mightier than the sword.” 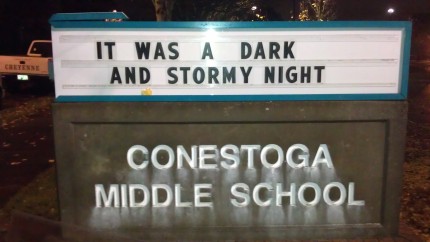 is known for a couple of quotations, “It was a dark and stormy night …” and “The pen is mightier than the sword.”. They are virtual opposites on the literary scale; one derided, one adored.

Thomas Midgely had over 100 patents and was lauded in his lifetime for his scientific achievements yet he was part of the team that invented leaded gasoline and chlorofluorocarbons, two of the most environmentally destructive substances ever made.

Orson Wells’ movie classic, Citizen Kane, was a box office failure but turned out to be one of the greatest films ever made.

We all experience failures, lots of failures. No success ever came without it.

Why would we ever want to let a failure hold us back?

Successfully updated the reader board at my daughter’s middle school.

Our perception of time is key to how we use our time. The most fundamental way to change that perception is to give our time. This opens us up to new opportunities and ideas from which we can build to really make a difference. ... Yes, we *do* have time to make a difference!
View all posts by Eric Winger →
This entry was posted in In the community and tagged Edward Bulwer-Lytton, failure, success, Thomas Edison, Thomas Midgely. Bookmark the permalink.
Loading Comments...
%d bloggers like this: