A Bowl Full of Science

“There is nothing which can better deserve our patronage than the promotion of science and literature. Knowledge is in every country the surest basis of public happiness.”

Before the sun came up on what would turn out to be a wonderful January morning, three hundred nervous and energized middle schoolers gathered in Franz Hall on the University of Portland to show off the power of their cerebrums.

Brain power was not in short supply at the 2012 Science Bowl. It’s a competition which pits teams of four against each other to test their knowledge of energy, biology, chemistry, physics and space. Think of the Science category on Jeopardy but the answers weren’t in the form of questions.

My son Zachary’s team from the Summa South Academy competed intensely (and I do mean intensely) against 68 other teams of budding scientists to create an electric and highly competitive atmosphere. Because the questions are part of a national competition, I can’t write any here. However, I can tell you that it’s important to know where the volcanic hot spots in the solar system are, which quadrant of the heart does what, and what is a unit of measure for a flowing river.

A whole lot of jittery kids and tired parents at 7am

The format puts two teams in a secured room with only the judges, coaches and a few parents. Teams are asked a question, (a hard question!) with the first person to buzz in given the right to answer. If missed, the other team gets a chance. Each correct answer gets a shot at a bonus question. An incorrect answer early is called an interrupt and results in a penalty. The whole thing happens rapid-fire, with a match taking twenty, nail-biting minutes. As I walked out of the first match I told the official,

“I’ve been a software engineer for twenty years, but I don’t think I’ve ever felt so dumb.” 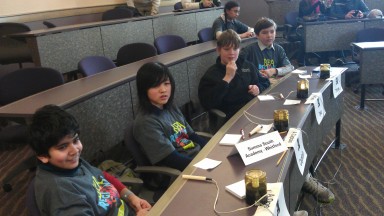 As a parent observer, each match also tested my nerves. In the near-silent room, each difficult question was followed with an answer then a pause which crawled along eternally until the judge pronounced either ‘correct’ or the dreaded … ‘incorrect.’ That was followed with whispers of excitement or agony from the team. Back and forth it continued until time had expired and a victor declared. That happened seven times. The kids handled it well, but my nerves may have become permanently frazzled.

Zachary’s team was good enough to make it to the round of 16, then winning once during double elimination, before being eliminated. The other team from Summa South just missed the cutoff for the round of 16 by a few measly points. Unfortunately in Science Bowl, there can be only won recognized winner who will go on to nationals and neither of our teams will advance.

But that doesn’t mean there aren’t a lot of other winners.

All the kids who practiced hard; learning to think quickly, handle pressure and expand their scientific repertoire. The staff of the Bonneville Power Administration, whose volunteers and sponsorship put the program together. The teachers who volunteered a Saturday getting their team from room to room, cheering them on. The volunteer coaches who gave up their time to help the team practice for weeks upon weeks. And the parents who cheered the right answers, agonized over the wrong ones, and hugged their kids … win-or-lose.

There are a lot of competitions in life and learning to rise to a challenge is necessary, but these kids aren’t learning this on their own. They have the support of a community.

Plus, they got a chance to show off their cerebrums.

Spent the day with my son’s team at their first Science Bowl competition, making myself feel dumb in the process.

Our perception of time is key to how we use our time. The most fundamental way to change that perception is to give our time. This opens us up to new opportunities and ideas from which we can build to really make a difference. ... Yes, we *do* have time to make a difference!
View all posts by Eric Winger →
This entry was posted in In the community and tagged biology chemistry, Bonneville Power Administration, cerebrums, chemistry physics, franz hall, giving time, hugs, Science Bowl, Summa South, Volunteering, Whitford Middle School, winners. Bookmark the permalink.

5 Responses to A Bowl Full of Science