“What is a cynic? A man who knows the price of everything and the value of nothing.”

As we pulled into the music shop where my daughter was going to have a lesson, a sign got her attention. 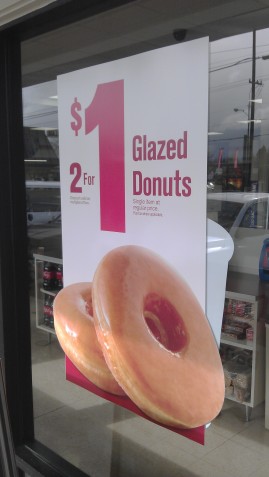 “Humph,” she muttered as she went into her lesson, disappointed but probably not surprised.

Forty-five minutes later, I pulled back into the parking lot. I looked over at the sign again. Still 2 for 1 Donuts.

I thought, “Hmmm. 2 for 1 sweet and tasty donuts. I could get one for her and one for me. All for one low, low price.” (Apparently, I think in advertisements.)

Motivated by my clever plan, I went over and bought the donuts from the smiling attendant. Handing him a crumpled dollar, he thanked me as if I had just bought a Mercedes. I knew this was a good idea. And cheap too!

My daughter came out of the building and got into the car. I handed her the bag of donuts and she gave me a huge smile. When I said that both were hers, she smiled again.

That’s all I really wanted. A smile.

And for the same dollar, I got two.

Our perception of time is key to how we use our time. The most fundamental way to change that perception is to give our time. This opens us up to new opportunities and ideas from which we can build to really make a difference. ... Yes, we *do* have time to make a difference!
View all posts by Eric Winger →
This entry was posted in Around the House and tagged donuts, giving, oscar wilde, smiling. Bookmark the permalink.