Behind The Scenes, In Memoriam of Dr. Eugene Brady

“Too often we underestimate the power of a touch, a smile, a kind word, a listening ear, an honest compliment, or the smallest act of caring, all of which have the potential to turn a life around.”

When you are in high school, the world is pretty small. There are people you like, people you don’t like, parents and teachers.

School administrators don’t really fit. They’re the ones who come into your classroom when the teacher has an emergency, or when one of your friends throws a tantrum. They’re the ones who stand in the hallway with a bemused smile on their face, while keeping a stern and watchful eye on the troublemakers. 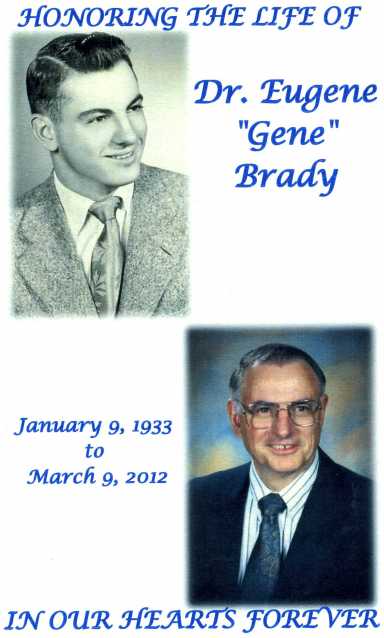 Dr. Eugene Brady was our principal at Perry High School in Iowa during the 80’s. I remember him standing in the hallway, everyday, alongside the vice principal. He’d greet me by name, every morning, while he kept an eye out for trouble. I remember him occasionally coming into our classroom, walking the halls, and keeping order over the chaos that is affectionately known as – the teenage years.

The irony of those years is that I don’t think I fully appreciated how much he did for us until much, much later and in an entirely different place.

Over the past 14 years, my wife and I have been raising our own children in Oregon. During that time, we were fortunate enough that they went to a relatively small elementary school. Because we were heavily involved in the school, I got to know and work with our children’s principal on an almost daily basis through school activities, the parent-teacher club, and volunteering in the classroom. My kids’ principal had an open door policy and we had long talks about education, math, passion, school boards, budget cuts, Title 1, poverty, emotional problems and egos.

As the years went on, I got a sense of the daily headaches and abuse a principal puts up with. The angry and abusive parents, the inevitable budget cuts, teachers’ unions, crying students, administrative rules, bullies, crabby teachers, abused students, school district administration, safety concerns and even an entire school remodeling. After seven years in the school, I watched as our principal, who suffered back pain, struggle to walk up and down the hallways, yet never failed to open the door to a teacher who needed to blow off steam or give a hug to any elementary student who wanted one, or needed one.

That’s what I think Dr. Brady gave to me, and all of my classmates at Perry High School. He was a barrier to the crap that a bureaucracy could throw at him. He helped hold together a framework within which a group of unruly teenagers could be educated and discover themselves. He held his head up high to the taunts and jeers that we kids said in private but he surely knew about; insults that no doubt hurt him.

Yet, in the face of that daily onslaught, he never wavered in his passion or his belief in the transformative power of education, or his compassion for his fellow man.

“Gene was a gentle soul. He never met a stranger and was perfectly fine sitting down and having a conversation with you about any subject. His family will miss him dearly as he was a compassionate, kind-hearted, gentle, and loving father and husband. He exhibited a passion for learning and always encouraged others around him to pursue the same.”

That speaks of Dr. Brady’s character but I think what my classmate Les wrote says it best, because it speaks of his heart,

“So sorry to hear about Dr. Brady passing away. He was more then just a Principal to me. When I was in High School I had a BIG problem with a certain American Gov’t. teacher. I found out he was going to flunk me so I decided I was going to quit school. After all I was working at Hardees making $3.18hr. Thankfully Dr. Brady believed in me. He and Mr. Witmer together told me that I was making a big mistake. They helped me with my problem with a certain teacher and I went on to graduate. The day we were getting our Senior group picture Dr. Brady called me aside and told me that he was proud of me. That meant a lot to me for him to even remember me. I will always remember him for his kind heart. I thank You Dr. Brady.”

Today, I only give you this memory of a man who gave so much more than any of his students may have realized.

Our perception of time is key to how we use our time. The most fundamental way to change that perception is to give our time. This opens us up to new opportunities and ideas from which we can build to really make a difference. ... Yes, we *do* have time to make a difference!
View all posts by Eric Winger →
This entry was posted in In the world and tagged Children, Dr. Eugene Brady, high school, Inspiration, Making A Difference, Needs Of Others, Perry High School, principals, Thank You. Bookmark the permalink.

4 Responses to Behind The Scenes, In Memoriam of Dr. Eugene Brady