“It’s not that I’m so smart, it’s just that I stay with problems longer.”

Back in February, I gloated a little about my son Zachary who was selected to represent his school at the Northwest Regional Science Expo in March. Today was that day. 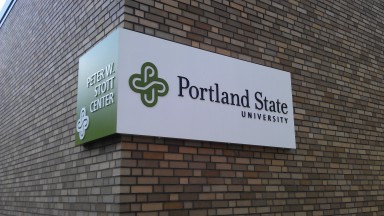 A day off school and a trip to a major university in downtown Portland was the reward for all of the competitors. But the road Zachary took to get there was a bumpy one.

After getting an invitation to compete, he decided to completely redo his experiment. The goal was to take his first experiment with dye-sensitized solar cells farther, and isolate and analyze just the anthocyanin in the fruits. Over the course of the two weeks preceding the competition, he isolated specific concentrations of the chemical, built dozens of specially-coated solar cells, measured, tested, and analyzed.

This week, as he finished his testing, he spent many late nights (2am?!) putting together his reports, tables, and speech. By the time Friday got here, he was a tired boy.

But in the end, he was rewarded for his efforts. These are the awards he won against over 400 other students from throughout the region:

Persistence paid off for Zachary. And I’m once again a proud papa.

Today’s gift of time – My only role was to loan one of my ties and go with my wife, spending part of an afternoon supporting my son and his classmates. They all were winners.

Our perception of time is key to how we use our time. The most fundamental way to change that perception is to give our time. This opens us up to new opportunities and ideas from which we can build to really make a difference. ... Yes, we *do* have time to make a difference!
View all posts by Eric Winger →
This entry was posted in In the community and tagged dye sensitized solar cells, middle school science, Northwest Regional Science Fair, persistence, science, solar cells. Bookmark the permalink.