“If pleasures are greatest in anticipation, just remember that this is also true of troubles.” 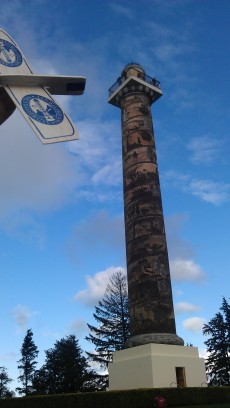 Don’t worry. The Astoria Column was not damaged during the glider’s fly-by.

Well, not everything. The actual event that we’re waiting for is pretty important too. But a lot of the enjoyment of birthdays, Christmas, website orders,  long projects, vacations, or remodeling projects is the anticipation experienced while we’re waiting.

Yesterday, our adventures took our family to Astoria, Oregon to show a little bit of Oregon history to our exchange student, and a friend of our daughters. One of the highlights of every trip to this historic city is climbing the steps of the Astoria Column where the kids can toss off a balsa wood glider from the top.

As you can imagine 164-steps is a long way up, so after two (or was it three) climbs and throws, the kids were pretty tired out. We had all gathered on one of the benches in the park below where a band was playing. Three recovered and otherwise undamaged balsa wood gliders lay on the bench beside us. My wife suggested giving away the little gliders. Nice idea.

A little while later three eager boys, trailed distantly by their mother, rushed toward the bottom of the column. I waved to her as she entered and offered the little flyers. The mother smiled and asked if I wanted something in return. I shook my head no with a smile. A thank you, a turn, and a few seconds later I could hear a distant conversation coupled with a few joyous cries. I wonder if the boys climbed differently, anticipating extra fun at the top. 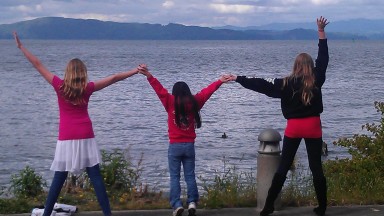 Enjoy the anticipation of helping someone. Maybe you’ll feel like jumping for joy, just like the girls did today.

This story may not seem like it has anything to do with giving time, but anticipation is relevant. When we give our time, some of that time is spent in preparation. That’s especially true if we are doing something nice for a stranger or volunteering in a new way. It’s a time we might feel nervous or anxious.

However, during that preparation time instead of worrying about how our gift will be accepted, or fearing that we will make a mistake (an angst that I understand well), we can relax and enjoy the anticipation, knowing that we’re trying to make the world a little better.

I anticipate a good day is in store for you, especially if you plan to help someone today.

Yesterday’s gift of time … My wife and I took five kids to Astoria, Oregon for some touristing, and got to spread a little goodwill and fun to three boys.

Our perception of time is key to how we use our time. The most fundamental way to change that perception is to give our time. This opens us up to new opportunities and ideas from which we can build to really make a difference. ... Yes, we *do* have time to make a difference!
View all posts by Eric Winger →
This entry was posted in While Traveling and tagged anticipation, Astoria Column, balsa wood gliders, postaday2012, worry. Bookmark the permalink.

1 Response to Anticipation Or Worry