Where In The Sam Hill?

“Where in the Sam Hill is that?”

I’m not sure where Nowhere is, but I’m pretty sure it’s just down the road from the Maryhill Museum of Art, one of the most impressively isolated cultural exhibits in the world. 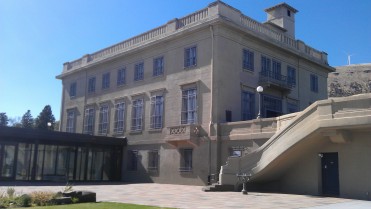 Built by Sam Hill, an early 20th century American entrepreneur, it stands as a verdant beacon in the midst of the barren landscape of central Oregon. Hill’s dream of a farm community along along the banks of the Columbia River didn’t come to fruition. However, his unfinished personal mansion, named after his daughter Mary, became home to a large collection of sculptures by Auguste Rodin, an extensive set of antiquities from Queen Marie of Romania, and a full-size replica of Stonehenge honoring fallen soldiers of World War I. 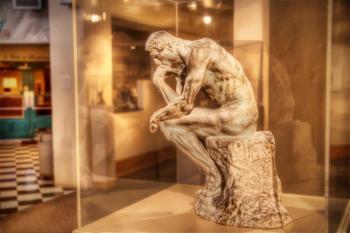 Hill wanted to create a farming community in central Oregon and went to great expense laying the foundations of a community including paved roads, all too infrequent at that time. Frustrated by the state of Washington’s unwillingness to build a road to his community, he eventually was persuaded by his friend, Loie Fuller an American actress popular in France, to create an art museum from his aborted mansion. She had been friends with Rodin in Europe and donated a large portion of her personal collection of Rodin’s works to Hill’s museum, including an autographed miniature version of Rodin’s famous Thinker.

Thanks to his extensive travels, Hill was also friends with Queen Marie of Romania who had been instrumental in peace talks ending World War I and was one of the last remaining monarchs in Europe. She donated many of her personal treasures including thrones, portraits of the royal family, her crown, and other personal items. The small museum’s collection of American and British paintings is equally as impressive. 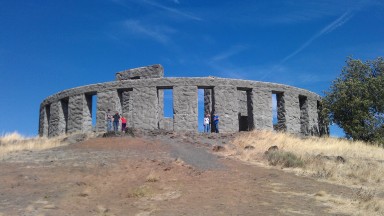 The other notable structure in the area is the full-scale replica of Stonehenge, the famous prehistoric astronomical observatory in Britain. Commissioned by Hill and completed in 1929 above his gravesite, it honors the 13 soldiers from Klickitat County, Washington who lost their lives in World War I.

As my family and I walked among the stones, we read the simple bronze plaques for each soldier who lived, and died, almost 100 years ago. Standing there with my own teenage children, in the context of those aborted lifetimes, it was a stark realization that those young men weren’t much older than my kids when they left their own families to die in some god-forsaken trench in Europe. They were men (kids) probably very much like the men and women who now serve overseas in our military. Nearly 100 years has past, but some things never change. 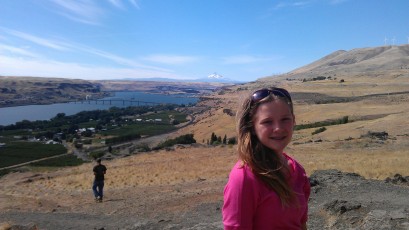 My daughter, Hayle. The Columbia River and Mt. Hood in the distance.

On the dry banks of the Columbia River, sits an oasis in the wind-swept deserts of central Oregon. Far in the distance to the west sits Mt. Hood; to the north Mt. Adams; wheat fields dust the landscape; basalt cliffs stand resolute; windmills dot the barren landscape; on a location where a dream became dust.

That oasis is the Maryhill Museum of Art, a verdant beacon in the middle of Nowhere.

Right next to Sam Hill.

Yesterday’s gift of time … Went Nowhere with my family.

Our perception of time is key to how we use our time. The most fundamental way to change that perception is to give our time. This opens us up to new opportunities and ideas from which we can build to really make a difference. ... Yes, we *do* have time to make a difference!
View all posts by Eric Winger →
This entry was posted in In the world and tagged august rodin, dreams, dreams turn to dust, dust, Loie Fuller, Maryhill Museum, Maryhill Museum of Art, queen marie, Queen Marie of Romania, Rodin, Sam Hill, Where in the Sam Hill Is That?. Bookmark the permalink.
Loading Comments...
%d bloggers like this: