“Trapped by reality, freed by imagination.”

Tragedy can consume us; tragedy can overwhelm us; and tragedy can become us. But there are those among us who, when faced with tragedy, overcome it – using a little imagination. 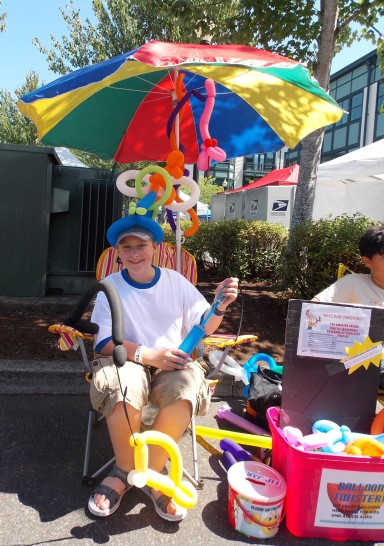 Earlier this year, Jacob lost his grandfather to cancer. Then, not long after, their family’s past exchange student from Japan told Jacob that he had been diagnosed with blood cancer. Tragedy times two.

It was a cruel twist of fate that would have been difficult for an adult, but doubly hard for an eighth grader.

Yet, with a resiliency that belies his age and using an imagination beyond his years, Jacob set out to overcome tragedy. Taking the skill that he knew, and with his mother’s help,  he setup a booth at one of the local Saturday markets here in the Portland area to make balloons for kids and raise money for a very important project. His goal was to earn enough money to travel to Japan to visit his sick friend.

But working at one farmer’s market wasn’t enough for this ambitious young man. He also setup a booth at the Oregon State Fair where he twisted balloons to raise money for his goal. It would have been enough to just make balloons that he knew how to make. But it takes that extra bit of imagination to do a little bit extra for a customer. Here’s Jacob’s take,

“I got a lot of practice twisting for kids when I was younger. I’ve taught myself how make a lot of new unique balloons this summer. If a child has a request for an unusual balloon, I can try to imagine it and make it! This is why I call my company Imagine Balloons.”

And there you have it. Imagine Balloons. Jacob’s company. Founded by an eighth grader who used his imagination to overcome tragedy.

We can’t avoid tragedy. Whether it is the passing of a beloved family member, a severe illness, job loss, or disaster, we must face the reality we’re dealt. But we don’t need to wrap the blanket of self pity around ourselves and hide.

Instead we can find inspiration in Jacob’s words,

“If you have a difficult situation in your life, you can always find a way to inspire!”

And it starts when we imagine something better.

I met Jacob last week at Future Stars, a Toastmasters club for middle and high school students, where he spoke about his experiences and his goals. And as far as I know, he met his goal.

Gifts of time this week … Hosted a Toastmasters division contest, replaced light fixtures in our martial arts studio, ran our Feedbackers Toastmasters meeting providing a forum to teach the power of positive evaluation, volunteered as line judge for my daughters’ volleyball games, many drives to the school bus, many dishes washed so my wife didn’t have to do them.

Our perception of time is key to how we use our time. The most fundamental way to change that perception is to give our time. This opens us up to new opportunities and ideas from which we can build to really make a difference. ... Yes, we *do* have time to make a difference!
View all posts by Eric Winger →
This entry was posted in In the community, Toastmasters and tagged Future Stars, imagination, Imagine Balloons, Inspiration. Bookmark the permalink.

4 Responses to Imagine Something Better